When you think of virtual reality the first thing to come to mind probably isn’t education, it’s more entertainment. Well, one of the fastest growing industries in the world is trying to reach a wider audience one of which is Education, and higher Education. There are many different ways this could benefit students in the classroom and we look forward to seeing how this is implemented in the coming years. With the Virtual reality industry, it’s just a matter of time until it becomes a household product like a radio or television Is in the modern world. But the producers are also trying to open up other routes which lead to completely different markets including education, healthcare, the military, space and much more! This brings more sales, investment and general interest around the products.

In the past decade, there has been a major change in the way education is delivered in general. With advancements in technology and more people gaining access to the internet, more people have started taking online courses. This removes the need to have as many teachers and means that people can gain qualifications while sat on the couch! Governments and organizations that provide education, especially in countries where you have to provide education for free would much prefer to use a VR device to deliver their lessons as they don’t have to pay a teacher, for electric, toilets, health and safety etc. It only looks as if more people will choose to take their lessons online, although this doesn’t mean that schools and universities can’t also benefit from the use of VR products!

Classrooms are the typical place for education to take place, and we believe this will stay the same even in the virtual realm. In other words, even when you are taking a virtual lesson half of them will be done in a classroom environment. Universities could massively benefit from this opportunity as many students have to travel a long distance to get there. If there was an emergency lesson or somebody had to go home early they could simply join in using their headset. We’ve already seen hospitals live stream select operations in order for doctors around the world and doctors in training to watch and improve their skills! Why could the case be the same with professors and lessons on different subjects?

We all know how hard it can be for less privileged people to gain access to any type of education which limits their capabilities in life, this shouldn’t be the case! With Virtual reality we have the opportunity to provide people around the world with good quality education, one VR device could change somebodies life and give them a chance to go somewhere and improve their situation.

Anybody who is in higher education would love to have their very own VR device to help them with revision. There’s one major problem with this at the moment, there’s simply not enough content out there to justify buying one! Hopefully, in the future, you will be able to re-watch lessons in order to pick up on anything you need to re-visit or you missed out on in the first place. There is also the opportunity for developers to make games that are fun and educational at the same time! Although this could be rather difficult when doing so for higher education students, it is still possible.

The one major problem with the headsets was the price as a good quality device would’ve cost anywhere between 300-700 pounds a couple of years ago. But now with the Google cardboard, Samsung Gear and many other models now being available for less than 100 pounds! University students are always short on cash so spending a large amount on a VR device may not have seemed like a priory, but with prices falling by the day it’s much more likely a purchase will be made. Another great example of how a VR headset could benefit students is the ability to take trips anywhere around the world. Imagine if you were doing history and could transport into the middle of Auschwitz, the Roman Coliseum or anywhere you desire within seconds.

The possibilities are endless when it comes to education through Virtual reality devices and we believe this will be one of the main types of education going into the future! There are already people using their headsets for a bit of extra revision and it’s only a matter of time until you can get a Virtual course and qualification. 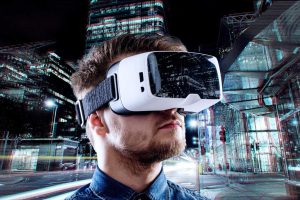 The Computer Science Behind VR